After sleeping for a few hours, Selma woke up around 5am, unable to get any more sleep. The hotel roof deck provided a possibility to get a few morning shots of the Seattle Space Needle, - the first of many this day. After a while, Louis woke up as well, and after our morning grooming we strolled out to do Seattle.

First stop was the Pike Place Market. Supposedly a great place, but we weren’t really all that impressed. It felt a bit like Holmenkollen in Oslo - a site that all the locals are proud of and want to show the tourists, while out-of-towners look at it and goes “Uuuuh.. Okay.”. Lots of flower booths and nick-nack stalls, and an overwhelming smell of fish. We tried to look for the first Starbuck’s (that opened here in 1971), but with no luck (only to find out later that it was just behind the truck on the picture below).

Then we walked up to the city center, and were both really impressed with the cleanness and beauty of the town. We had a quick stop at Macy’s, grabbed some lunch at a diner inside of Nordstroms, found a camera store and bought some photo equipment - and decided to go pick up the car. We were four hours early according to our reservation, but the car was ready - so we signed all the papers and went to find it in the parking garage.

Our first encounter with the beauty

When Jeremy, the Hertz guy, gave Louis the keys, he held up one specific key. Louis got the impression that this was the key to the ignition, and held on to it all the way up to the 6′th floor. There we found our little wonder. A Cadillac STS, red in color, and as it turns out a little enigma when it comes to starting the beauty. After some swearing and cussing, and some poking around, we found the magic button. You do NOT use the key, it’s just a matter of having the key chain with you in the car, and then press the on/off-button. Convenient.

After finally getting the car awake, we took it to the hotel. This was our first encounter with our other traveling companion, Kitty. She sits between us in the front of the car, telling us where to go in a firm, but polite, voice. We immediately fell in love with Kitty, and even though we told Jeremy at Hertz we wouldn’t need her, we’ve been taking advantage of her ever since! (If you’re curious about how Kitty looks, we’ll post a picture of her eventually).

Louis in our car, photo by Selma

With the car safely parked in the hotel parking garage, we went back out into the sun. The weather was beautiful! It was hot and sunny, and on the news they said it was only one degree (Fahrenheit) below the record from 1995 - with 74°F/23,3°C.

We planned to walk back downtown past the Space Needle (which was just a few blocks away from the hotel), but as we got down to the needle, we found a fair ground, a park area and a weird looking buildning. We decided to stay a while - and Selma went berserk with her camera, practicing panning shots:

We went to take a further look at the weird building, which turned out to be the “Experience Music Project” - with an interactive music museum and an extra sci-fi part. The admission fee was $15 per person, so we went to ask what was inside. And lucky for us: The first Thursday every month was free entrance between 5 and 8 pm - and it was 4:45. So we got to check out the museums, and they were actually really nice! The music department contained several interactive stations, where you could test out different instruments, record a “demo tape” or join in on a jam session. Great fun for the kids - also those in their thirties! We also got to see parts of Jimi Hendrix’ smashed guitars, a sweater worn by Kurt Cobain and lots of other memorabilia.

The Sci-Fi department contained memorabilia and replicas from many sci-fi movies, series and books. Star Trek uniforms, a huge replica of the queen monster from Aliens.. And Selma took a long look (on behalf of her GF) at a Darth Vader mask and a model of the Death Star used in one of the Star Wars movies. Too bad we weren’t allowed to take pictures..

Reflection in the EMP building, photo by Louis

After walking around at the EMP for a while, we were super tired - and canceled the plans to go out for dinner. We still suffered from the jet lag, and Selma was suffering from the lack of sleep. We went back towards the hotel, and picked up a pizza at Pagliacci, a pizza place recommended by one of Selmas favorite bloggers. Back at the hotel room we enjoyed the pizza, watched a bit of Greys Anatomy (it’s taking place in the neighborhood, right..) took a trip back up to the roof to get some night shots of Seattle, and did some picture and computer work before crawling into bed.

You can, of course, see our photos from Seattle at Flickr. 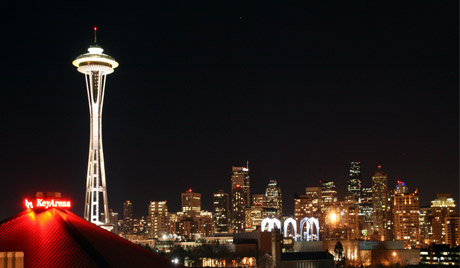 There are 2 responses to “Seattle”

Pagliacci pizza place? In the graphic novel “Watchmen”, one of the main characters tells a joke about Pagliacci (which, in that context, isn’t funny at all):

A man goes to the doctor. Says he’s depressed. He says life seems harsh and cruel. Says he feels all alone in a threatening world where what lies ahead is vague and uncertain. The doctor says “The treatment is simple. The great clown Pagliacci is in town tonight. Go and see him, that should pick you up.” The man bursts into tears. He says “But doctor… I am Pagliacci.”

To those of you who didn’t get it - Kitty is our nickname for the GPS system in the car. She’s named after K.I.T.T. of Knightrider fame.

Well, now you can actually get your very own K.I.T.T. - or at least the voice of it - in your own car! With blinking red lights and that well known voice coming from your GPS set, you can now feel like Michael Knight aka David Hasselhoff as you cruise around in your old Fiat.

Check it out at knightridergps.com!

Got tips? Comments? Do tell!

We're back after more than six weeks on the road. We'll post summaries of the last days of our trip and upload the pictures, but first we'll take some time to resettle back home and catch up on all we've missed while we were gone.

We travelled from Seattle, Washington to Key West, Florida:

You can read our reports
from the road here:

.. or see our preparational
writeups about

To get notified whenever we publish something new, subscribe to the RSS feed.